Theater review: ‘In the Heights’

Theater review: ‘In the Heights’
By Elizabeth Maupin
Orlandotheater.wordpress.com

Maybe you’ve never ventured north of 96th Street in New York City, and the George Washington Bridge is just an Erector-Set toy out your hotel window and way, way uptown.

None of that matters with the magnetic Latin-flavored musical In the Heights, a show so engaging that it does the seemingly impossible: It pulls you in. It makes you yearn to belong.

An offbeat little show that made an unlikely leap to Broadway, In the Heights and its cast of unknowns took audiences by surprise and wound up winning the 2008 Tony Award for best musical. There are no names, either, in the national tour, which is at Carr Performing Arts Centre through Sunday night. But there are lots of heroes – young (and a few not-so-young) actors whose talent and charisma send you leaping to your feet.

In the Heights began as a college project for Lin-Manuel Miranda, the show’s now-30-year-old composer and lyricist, who wrote the first songs as a sophomore at Wesleyan University and originated the lead role of the young bodega-owner Usnavi. Miranda grew up in Inwood, the farthest-north part of Manhattan, but it was neighboring Washington Heights and its cacophony of Latino cultures that Miranda took for the real star of his show – a throbbing neighborhood that, in this musical, becomes as comfortable and familiar as Mr. Rogers’s own.

There, in the shadow of the George Washington Bridge, Usnavi runs the corner convenience store, next to Daniela’s beauty salon, the source of neighborhood gossip, and across the street from Rosario’s car service, where daughter Nina has escaped the barrio and gone off to study at Stanford. Everyone else in the Heights envies her: Sultry hairdresser Vanessa longs to move downtown, the elderly Claudia dreams of her native Cuba and Usnavi feels the burden of his broken-down bodega, which he has run since his parents died young.

Those characters and more make up the fabric of this show, which rests on a rather old-fashioned, boy-gets-girl kind of book (by Quiara Alegría Hudes, author of the much more elliptical Elliot, a Soldier’s Fugue) but pulses with the rhythms of hip hop, salsa, merengue  and more.  Usnavi himself talks almost entirely in rap, but it’s rap to the nth degree: He talks about “my man Cole Porter,” and he rhymes braggadocio with Pinocchio, “you’re buyin’” with “L’chaim.” Some of the music sounds as if it comes from wistful Latino folk melodies; most of it pulsates, and it pulls you to the edge of your seat.

The grimy brownstones and looming bridge of Anna Louizos’s Broadway set are just as evocative in the national tour, where the set may look a little smaller on Bob Carr’s stage but still gives the sensation of life thrumming behind all those windows and doors. The place may be grimy, but it’s home, and Howell Binkley’s warm lighting makes sunrise in the Heights look more gorgeous than sunrise can possibly look.

Director Thomas Kail also helps this cast look and sound as good as the Broadway originals, from Kyle Beltran’s comically fidgety Usnavi to Rogelio Douglas Jr. as Benny, the African-American car-service dispatcher – young and sweetly eager – who longs for Nina. 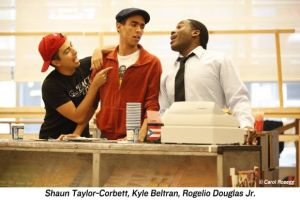 This is as strong a cast as there can be: Sabrina Sloan as the yearning, angry Vanessa; Arielle Jacobs as the broken Nina; Oscar Cheda as her bull-headed father, Kevin; Natalie Toro as her even more adamant mother, Camila; Elise Santora as the feisty Abuela Claudia, who raised Usnavi and has become the neighborhood muse.

Somehow, though, it’s the backdrop of lesser characters who give In the Heights its flavor – Graffiti Pete, the nighttime tagger (Jose-Luis Lopez, a dancer with a phenomenal presence); the guy who sells shaved-ice piraguas (the sunny David Baida, who pays Kevin at some performances). Shaun Taylor-Corbett is a stitch as Sonny, Usnavi’s combustible young cousin. And there’s something about the sweet-voiced trio of hairdressers (Santiago, Sloan and Genny Lis Padilla, as Carla) that makes me think of angels.

4 responses to “Theater review: ‘In the Heights’”