Here’s a roundup of what’s starting up this week in Orlando and area theater:

Free movie and a free reading at Orlando Shakespeare Theater:

Free Shakespeare movie night in the park to celebrate the Bard’s birthday & free reading of Lysistrata – both this weekend at the Lowndes Shakespeare Center!

Orlando Shakespeare Theater in Partnership with UCF is presenting a FREE screening of Kenneth Branagh’s Much Ado About Nothing under the stars on Shakespeare’s Birthday!

What: Screening of Much Ado About Nothing

Where: Loch Haven Park on the corner of Mills and Princeton in the grass

Who: Presented by Orlando Shakespeare Theater with help from our friends at Enzian Theater

Why: To celebrate the Bard’s 446th Birthday!

Cost: FREE!  Bring a blanket and enjoy a movie under the stars.  Popcorn will be included, but you’re welcome to bring a picnic!

Orlando Shakes will hold a FREE reading of Lysistrata by Aristophanes on Sunday, April 25 at 7 p.m at the Lowndes Shakespeare Center.  There is no charge for this event and reservations are not required.  Join us for this short, sweet sophisticated Greek treat! 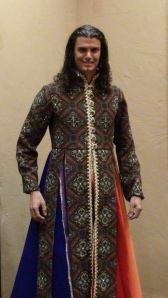 With a cast of 48, and crew of more than 30 (most of which are volunteers) this Broadway-style production will cap off the Garden Theatre’s 09-10 theatrical season.

ABOUT THE SHOW
The Biblical saga of Joseph and his coat of many colors comes to vibrant life in this delightful musical parable. Joseph, his father’s favorite son, is a boy blessed with prophetic dreams. When he is sold into slavery by his jealous brothers and taken to Egypt, Joseph endures a series of adventures in which his spirit and humanity are continually challenged. He is purchased by Potiphar where thwarting advances from Potiphar’s wife lands him in jail. When news of Joseph’s gift to interpret dreams reaches the Pharaoh (wryly and riotously depicted as Elvis), Joseph is well on his way to becoming second in command. Eventually his brothers, having suffered greatly, unknowingly find themselves groveling at the feet of the brother they betrayed but no longer recognize. After testing their integrity, Joseph reveals himself leading to a heartfelt reconciliation of the sons of Israel. Set to an engaging cornucopia of musical styles, from country-western and calypso to bubble-gum pop and rock ‘n’ roll, this Old Testament tale emerges both timely and timeless.

ABOUT THE DIRECTOR
With a PhD in Theatre from NY University, and an MA in Choreography from Brigham Young, our director of Joseph brings a vast amount of entertainment experience to our theatre.  Mark’s off-Broadway credits include Pippin, Sondheim, The Dark Side, Sunday in the Park with George,Joseph and the Amazing Technicolor Dreamcoat.  His regional theatrical credits include such hits as Paint Your Wagon, Unsinkable Molly Brown, Sound of Music and Carousel to name just a few.  Mark also spent time at the Gaylord Entertainment Company in Nashville and created shows for Opryland USA Theme Park.  He now holds a staff position with Walt Disney Company and is the Co-Founder and Creative Director of P2 Entertainment Productions here in Orlando. and

Joseph, David Coalter (Orlando)
A native of California, now living in Metro West, David has been performing for over 22 years including Disneyland in Anaheim, Tokyo Disneyland, Sea World (Orlando), Nickelodeon Hotel, over 22 musicals and now for the last 3½ years at the Holy Land Experience.

Narrator, Patte DePova* (Davenport)
Patte has lived and worked around the world.  Her international and regional credits include Cats (Demeter), Beauty and the Beast (Silly Girl), Peggy (Peggy), Miss Saigon (Gigi), The Wild Party (Kate), Musical Theatre Gala-European Tour (Eponine, Grizabella).  For the past nine years Patte has been performing for Disney Entertainment at Walt Disney World and Tokyo Disneyland in Tarzan Rocks!, Festival of the Lion King, Finding Nemo-The Musical, Spirit of Aloha Luau, Encore, and is a member of the opening cast of The American Idol Experience.

Andrew Lloyd Webber and Tim Rice’s most playful, uproarious and joyous musical, Joseph and the Amazing Technicolor Dreamcoat comes to Winter Garden, in a production starring our own hometown talent, as the Garden Theatre embarks on its first producing adventure.  This “colorful” family classic retells the Biblical life of Joseph of Canaan and his amazing abilities in energetic fashion and spanning musical styles from calypso to cabaret, rock to country, and more.

Recommended for children 5 and up.
Children 2 and under are welcome to sit on a parent’s lap at no charge for this performance.

Orlando, can you feel the Winds of Motion?

Calling all So You Think You Can Dance lovers: the University of Central Florida Conservatory Theatre ends their stellar 2009-2010 season with a night of dance with their fourth annual dance concert: Winds of Motion.   The dance concert is directed by Brian Vernon and will run at Orlando Repertory Theatre from Thursday, April 22 through Sunday, April 25.

“The process for each year’s concert it always different, as there are different choreographers and dances,” says Vernon, “but the goal is always the same: to put on a good concert.”

Winds of Motion is an eclectic mix of many diverse dance forms—styles range from contemporary to ballet to African flair, so there will be something for everyone! Even if you’ve never watched live dance, Brian guarantees that you will be entertained.

“Dance is the most primitive art form, since it was first used as a means of communication … dance is inherent in human nature.”

The design team and choreographers of these 19 exciting dance pieces include faculty as well as students. Please note: the dance number at the end of Act I, prior to intermission, does contain adult themes and partial nudity.  Parental and viewer discretion is advised.

Winds of Motion opens at the Orlando Repertory Theatre on Thursday, April 22 at 8 pm. The theatre is located at 1001 East Princeton Street in Orlando. The concert runs from Thursday April 22 through Sunday the 25th with shows starting at 8 pm, except for the Sunday matinee which starts at 2 p.m.

To purchase tickets or for ticket information call the box office at (407) 823-1500. Ticket prices are $19.00 for adults, $17.00 for seniors over 55 and $12.00 for students, with group rates also available. It is strongly recommended to make reservations which are available through the UCF Conservatory Theatre box office. UCF offers accommodations to make the theatre more accessible to patrons with disabilities—for assistance, please call ahead to the box office.

Facts at a glance:

Accessibility: UCF offers accommodations to make the theatre more accessible to patrons with disabilities—for assistance, please call ahead to the box office.

Surfside Players, Cocoa Beach, is proud to present its spring musical, Hair, the first rock musical, an anthem of the hippie counter-culture and one of the most controversial theatre spectacles of the 1960’s.  Hair tells the story of the “tribe,” a group of politically active, long-haired hippies of the “Age of Aquarius” living a bohemian life in New York City and fighting against conscription into the Vietnam War. Claude, his good friend Berger, their roommate Sheila and their friends struggle to balance their young lives, loves and the sexual revolution with their rebellion against the war and their conservative parents and society. Ultimately, Claude must decide whether to resist the draft as his friends have done, or to compromise his pacifistic principles and risk his life by serving in Vietnam.

This show contains strong language, suggestive dancing, depiction of drug use, and brief nudity, and is for Mature Audiences Only.  Audience members under age 18 must be accompanied by parent or guardian; we have special ticket prices for families of four.

Directed by Michael Thompson.  Musical Direction by Dan Harrald and featuring live rock-band music.  Choreography by Rachel Cooke.  Presented by special arrangement with Tams-Witmark.  To get to Surfside, take A1A into Cocoa Beach, and turn west on Fifth Street South.  Call (321) 783-3127 or go to www.surfsideplayers.com for more info.

The synopsis of Grease : Grease is the word! Here is Rydell High’s senior class of 1959; duck-tailed, hot-rodding “Burger Palace Boys” and their gum-snapping, hip-shaking “Pink Ladies” in bobby sox and pedal pushers, evoking the look and sound of the 1950s in this rollicking musical. The show tackles such social issues as teenage preganancy, and gang violence; its themes include love, friendship,  teenage rebellion, sexual exploration during adolescence, and, to some extent, class consciousness/class conflict.

The musical play production of Grease features some of the following famous songs: Summer Nights, Greased Lightnin’, We Go Together, Look At Me I’m Sandra Dee, Beauty School Dropout, There Are Worse Things I Could Do … and more!

Grease is a Jim Jacobs and Warren Casey musical play that was also developed into a movie in 1978, that featured such talent as Olivia Newton-John, John Travolta, Stockard Channing, and Frankie Avalon. The movie version of Grease was nominated for 1 Oscar and 5 Golden Globes.

For any other additional information, questions, and press inquiries concerning the upcoming musical play production of Grease, please visit www.WayneDenschPerformingArtsCenter.com or please call 407-321-8111.

HUDSON, FL – The Show Palace Dinner Theatre kicks off its 2010 Spring/Summer season with an exciting production of the Bob Fosse classic Sweet Charity. Based on Federico Fellini’s screenplay Nights of Cabiria, Sweet Charity was originally choreographed and conceived by Bob Fosse, with music by Cy Coleman. This classic musical is a tender, poignant, and consistently funny look at the adventures, or rather the misadventures, in the ways of love encountered by the gullible and guileless lady known as Charity Hope Valentine. Charity is a dance hostess who always gives her heart and her dreams to the wrong man. Her luck starts to change when she meets a suave Italian movie star, but things really start to look up when she runs into a shy but sweet guy in a night-school elevator. Could this finally be her Prince Charming? Broadway standards “Big Spender,” “If They Could See Me Now,” and “The Rhythm of Life” are among the songs in this spirited and fun-filled classic. The musical also features lyrics by Dorothy Field and a book by Neil Simon.

“We are thrilled to present this exuberant and stunningly choreographed musical to the Show Palace stage,” said Matthew McGee*, Show Palace’s Artistic Director. “At Show Palace, our mission is to celebrate and perpetuate the art of musical theatre and with Sweet Charity, we are proud to present this classic musical and reinvigorate it for today’s audiences.”

Samantha McKinnon Brown* (Charity Hope Valentine) And Christopher Swan* (Oscar/Vittorio) will headline the upcoming Show Palace production Sweet Charity. The show, directed by Resident Musical Director Michael Ursua* (star of The Producers and Dirty Rotten Scoundrels. Director of 2009’s Thoroughly Modern Millie) and choreographed by Shanna and Chris Sell (The Producers, Seven Brides for Seven Brothers), is set to open on April 23. Samantha McKinnon Brown* was recently seen in American Stage Theatre Company’s production of Doubt and has performed regionally in roles like Roxie in Chicago and Betty Haynes in Irving Berlin’s White Christmas. Award-Winning actor Christopher Swan* is well-known to Florida audiences in numerous productions at American Stage Theatre Company, the Golden Apple, Palm Beach Dramaworks, and the Hippodrome in Gainesville. Christopher is the recipient of Sarasota Magazine’s 2009 Best Actor in a Musical for his performance in La Cage aux Folles at the Golden Apple.

This Show Palace premiere featuring an energetic cast of singers and dancers and fresh direction and choreography is destined to become the sleeper hit of the 2010 season. Make your reservations now!

*Indicates member of Actors’ Equity Association, the union of professional actors and stage managers in the United States.

One response to “Opening this week”