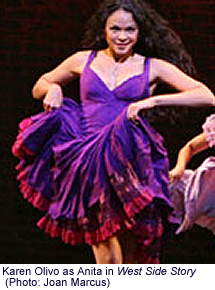 Karen Olivo, a Tony Award winner for her role as Anita in the current Broadway revival of West Side Story, will return to her old stomping grounds in November with an appearance at Theatre Winter Haven, where she was active as a teenager.

Olivo, who also starred in Broadway’s In the Heights, is not actually one of the so-called Divas: Those are a dozen or so singers who have performed at Theatre Winter Haven in recent years, who will perform in a talent competition on which the audience will vote. Olivo, who also played Anita at Theatre Winter Haven — in 1993 — will sing after the rest of the performers and then will crown the winner.

Tickets to the Nov. 5 benefit, which is at 7:30 p.m., are $55 and includes drinks, hors d’oeuvres, a diamond giveaway and dessert with the Divas.

(Photo of Karen Olivo in the Broadway production of West Side Story by Joan Marcus.)