Theater review: ‘The Turn of the Screw’

[Catching up with shows that opened while I was on vacation — this time around, Orlando Shakespeare Theater’s The Turn of the Screw:] 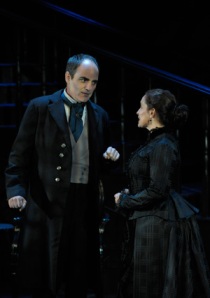 Ghost stories are a dime a dozen this time of year.

Lots of people are fine with that, and they’ll look at Orlando Shakespeare Theater’s The Turn of the Screw – with its looming tower, its gloomy staircase and its atmosphere of underlying evil – as more of the same.

But that’s taking the shortsighted view of Henry James’ 1898 novella, which has fueled readers’ and critics’ arguments for more than a century and has been adapted by playwright Jeffrey Hatcher with all of its creepy ambivalence intact.

You can look at Orlando Shakespeare’s production as just a 19th-century ghost story – the eerie tale of a plucky governess and two small children marooned on a lonely English manor. Or you can look at The Turn of the Screw, handily directed by Anne Hering with wit, insight and a galloping pace, as a Victorian tale of another sort, a perceptive look at the inner life of a young woman in over her head. 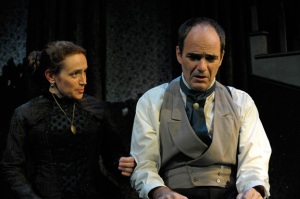 There’s a third way of seeing the show, and that’s as a welcome return to the Orlando stage for two fine actors: Eric Hissom and Suzanne O’Donnell, both longtime members of Orlando Shakespeare Theater’s company and both seen too seldom here in the past several years.

Hissom and O’Donnell are the only two actors in this 75-minute, full-tilt-boogie retelling of James’ story, in which an innocent governess takes on the task of minding two strange children on an Essex estate called Bly. The unnamed governess is beguiled by the children’s bachelor uncle, who hires her in London but forbids her to contact him once she has moved to the country. And at first she’s entranced by little Flora, who doesn’t speak, and her brother Miles, a 10-year-old who is sent home from boarding school for some unspecified offense.

But the children prove to be wayward, and the governess fears they are being seduced by two shadowy figures – Jessel, the previous governess, and a malevolent valet called Peter Quint, both of whom happen to be dead.

In the Goldman Theater, scenic designer Bob Phillips has provided one of the most beautiful sets I can remember there – a grand, desolate staircase, with bronze-colored walls that seem to glisten under Eric T. Haugen’s lighting and disappear to reveal a cold, lovely landscape and an ominous Gothic tower.

Hissom greets the audience first as a sort of malign narrator, while O’Donnell is at her most ingenuous as the young, unsophisticated woman in need of a job. Then, in a tour-de-force performance, Hissom plays everybody else: the quirky bachelor uncle; the not-so-bright housekeeper, Mrs. Grose; the silent, beautiful Flora and the old-beyond-his-years Miles – the latter three, at least once, at the same time.

(Hissom may be used to taking on multiple personalities: He recently completed the nine-month national tour of The 39 Steps, in which he played dozens of men and women and at least one or two inanimate objects.)

O’Donnell’s north-country accent comes and goes, but she’s every bit as appealing as she must be as a young woman who starts out idealistic (and a little foolish) and grows all the more determined – steely, even – as things turn bad. And Hissom makes much of his characters, but especially of Miles, who scampers and spits out non sequiturs like a child but stares down his governess in a disquietingly adult manner. 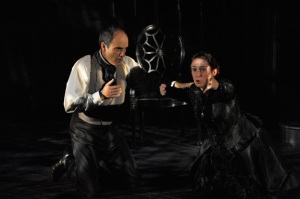 The actors and their director, too, have brought plenty of wit to the proceedings: I loved watching Hissom, as the stolid housekeeper, holding up his pants legs as if he’s holding up petticoats, and watching O’Donnell cajole little Flora as she hides behind Mrs. Grose’s invisible but apparently voluminous skirt.

It may be that there’s a little too much of this production to like: The story paled a bit for me once I started questioning what was really going on (or remembered the inner workings of the plot from high-school English), and all the sound and fury got to be a little wearing.

If you’re coming fresh to The Turn of the Screw, though, I suspect you’ll be as seduced by the goings-on as O’Donnell’s credulous governess – and as inclined to believe what’s right there in front of you. A good ghost story needs little more.